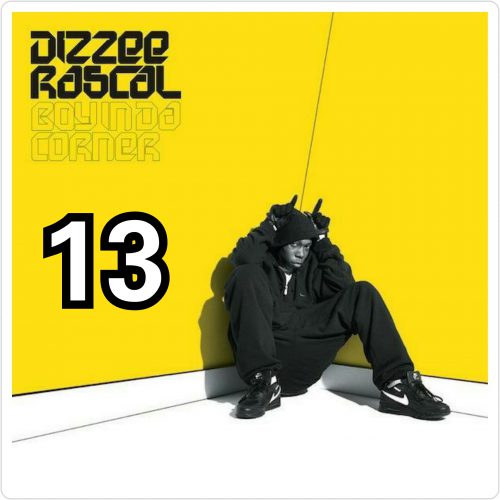 On July 21, 2003 (thirteen years ago today) ‘Boy In Da Corner’ the debut album of British grime MC Dizzee Rascal, released by XL Recordings in the United Kingdom and Matador Records in the United States.

The album shifted the landscape of British music, easily being one of the most important albums in the UK in last 20 years, exposing underbelly of inner London life, of gangs, drugs, and teenaged relationships, over sparse, stripped-down, raw-production. Combining  elements of Hip-hop, Garage, Drum & Bass, and Dancehall to popularise a sound known as Grime.

Wiley is considered by most to be ‘The Godfather of Grime‘, so it would be only fair to call Dizzee Rascal the ‘Poster Boy of Grime‘, possessing the ‘X-factor’, which made him the most appropriate artist to be the face of the then emerging genre.

The album received positive  reviews across the board,  resulting in Dizzee Rascal winning a Mercury Award, which  is a massive achievement for piece of work that was crafted by a teenager.

The album ‘Boy In Da Corner’ was a critical and commercial success achieving BPI certified Gold status on September 26, 2013, selling excess of 100,000 units in the UK (Source: BPI Website).  It reached its peak position in the UK album charts when it went to No. #23 in the chart week commencing August 2, 2003.

Dizzee’s The lead single ‘I Luv U’ peaked in the UK singles chart at No #29, with subsequent singles ‘Fix Up Look Sharp’, and ‘Jus A Rascal’ peaking at No #17 and No. #30 respectively.

Dizzee Rascal we salute you!

All tracks were produced by Dizzee Rascal, excepted where noted.