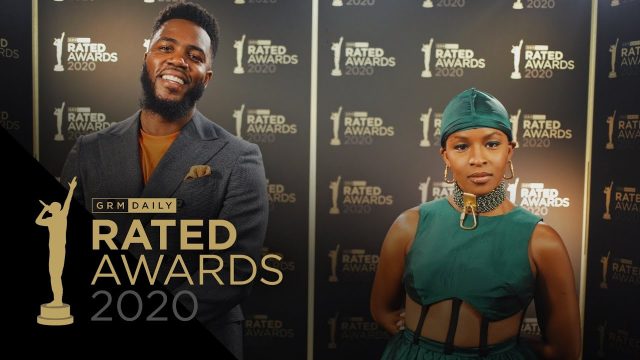 Last night saw some the biggest names in the UK urban scene celebrated at the fifth annual  GRM Daily Rater Awards  in partnership with YouTube Music and German Doner Kebab.

The live ceremony for the  GRM Daily Rated Awards 2020 had to be restructured in order to fall in-line with the governments social distancing rules, so there were no live audiences for the show. Reunited, were hosts Mo Gilligan and Julie Adenuga  who presented the show which consisted of pre-recorded performances from the likes of: Kano, George The Poet, Br3yna & Ivorian Doll,  Abra Cadabra,  and Dutchavelli & M Huncho,

The highlight of the night was pioneering Grime MC, Dizzee Rascal picking up the GRM Legacy award, who did a big performance running through visually-themed medley of some of his biggest tunes from his catalogue.

It was another great night of enterainment, although the true live element was missing, it overall the show production values were excellent,  which made for a better viewer experience.

Congratulations to the GRM Daily team for coming back bigger and stronger, look forward to 2021 when hopefully things will have returned to some form of normality.

The winners for the  GRM Daily Rated Awards 2020 are as follows:

Artist Of The Year

Breakthrough Of The Year – Dutchavelli

Personality Of The Year – Chunkz

Producer Of The Year

Female Of The Year – Stefflon Don