Boy Better Know’s Skepta  has great cause for celebration as his highly-anticipated fourth studio-album,‘Konnichiwa’ has smashed its way into the Top the 10 on the UK Official albums chart, entering at No #2.

Released on Friday, May 6, 2016,  ‘Konnichiwa’ shot up the iTunes albums chart to take the No. #1 spot,  simultaneously taking  the  No #1 on the iTunes hip-hop/rap chart  by default.

The official midweek chart was published on Monday, May,9, 2016 which showed that, ‘Konnichiwa’  had gone to No. #1, and was 200o copies ahead of its nearest competitor (Beyonce -‘Lemonade’) according to the Official Chart Company.

It was reported by some that Konnichiwa had sold 15,000 in its first twenty four hours on sale, and by the time the midweek chart was published it is believed to have accumulated sales of 22,361 units.

While this was a positive sign it is often the case that towards the end of the week, sales from some of the bigger artist start to pick up, and with news of Radiohead releasing their surprise album, ‘A Moon Shaped Pool’, it was always going to be a tall order to hold off the musical giants, but the fight was on.

The official UK albums chart for the week commencing May 13, 2016 were published earlier today, revealing that ‘Konnichiwa’ was unable to hold off  ‘A Moon Shaped Pool’, which took the No.#1 spot, but was able to maintain its position ahead of Beyonce’s ‘Lemonade’ entering the chart at No. #2. 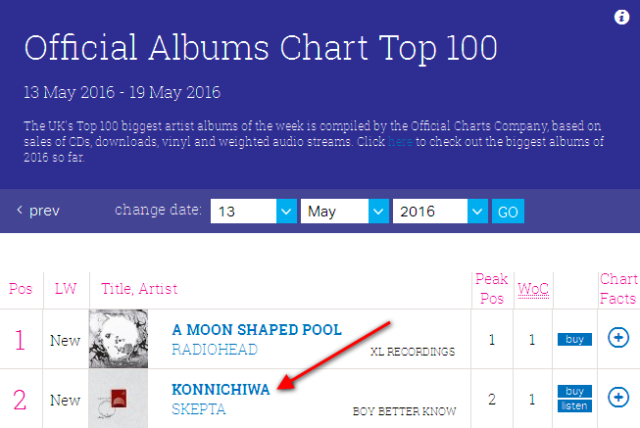 The numbers are impressive for an independent release with Skepta racking up sales of 35, 065 units, broken down to 22074 digital downloads, streaming equating to 8504 unit sales,  and  4487 of physical sales.

‘Konnichiwa’ is Skepta‘s  highest-charting album, and first top 10,  surpassing his previous album, ‘Doin It Again’ which went to No#.19 in 2011. The north Londoner  also has  the highest-charting Grime / UK Hip-Hop album of 2016 so far,  taking the lead from fellow Grime veteran, Kano whose latest album, ‘Made In the Manor’, which entered the official UK Albums Chart at No #8 in March this year.

Without doubt this is a massive achievement for Skepta who has been grinding independently for over  a decade, and has been taking the Grime sound around the world. The success of ‘Konnichiwa’ which some already calling a classic, will fill the UK with more confidence going forward, in a year which is shaping up  to be best ever for the genre.