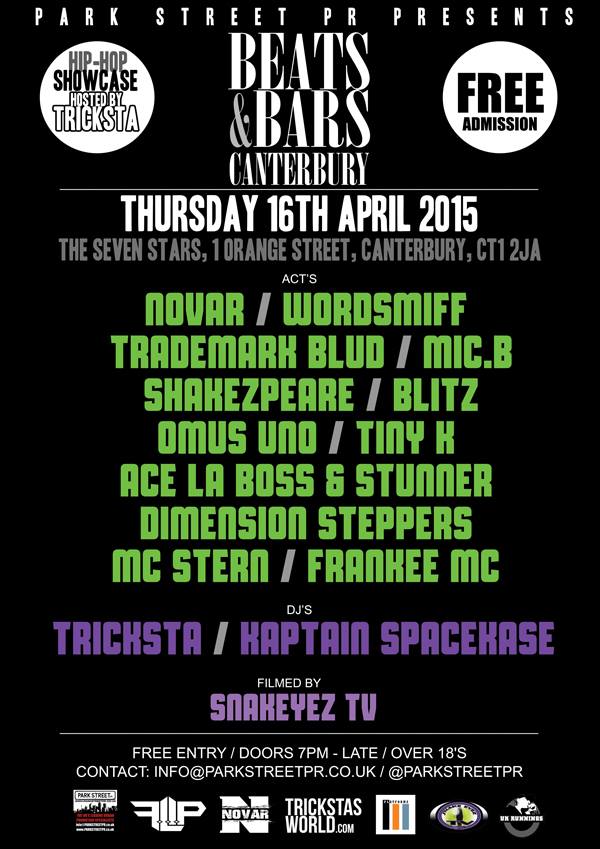 Beats & Bars lands in Canterbury for its first show and what a line-up we have for you. Live performances by a bag of talented Hip-Hop acts including legendary London artists Novar (formerly known as Supar Novar), who been an integral member of the UK Hip-Hop scene for over twelve years. As a member of ‘The Mud Family’ with acts like Skinnyman he went to release an album on Kemet Records, the same label that released Klashnekoff’s ‘Murder’. Novar has performed at Glastonbury, as well as supporting Ghostface Killah, Bone Thugs N Harmony, M.O.P, The Clipse, DJ Premier & more, and has featured on classic UK tracks with Foreign Beggars, Ed Skrien, Wordsmiff, Genesis Elijah, Skinnyman, Doc Brown and many more. Novar will be joined by fellow F.L.I.P member, the legendary Wordsmiff the rapper that dropped the classic ‘In Pursuit Of Harmony’ album that featured the likes of Skriblah from Terra Firma, Micall Parknsun, Dr Syntax, Foriegn Beggars, Dubbledge and more. Both emcees are known for their energetic performances so expect pure fire!

Also on the night we have performances from Midlands based rapper Trademark Blud, a Beats & Bars regular and co-host who has recently been signed to Chicago record label Platformz which is run by producer Rediculus. Also from the Midlands, is Coventry rap legend Shakezpeare an artist who recently impressed the world with his latest album that was produced by Dr. G. No Beats & Bars event would be complete without a barrage of local acts too, so we’ve enlisted the help of a bunch of talented spitters comprising of Canterbury co-promoter Mic B, Tiny K, Ace La Boss & Stunner, Dimension Steppers, MC Stern, Frankee MC, with legendary Hip-Hop DJ Tricksta and producer/DJ Kaptain Spacekase holding down the 1’s and 2’s.

Impressed? You should be… all that and its FREE ADMISSION! Our advice would be to get there early, as this is going to be one seriously great night of positive and conscious Hip-Hop music. Peace, unity, love and having fun… Beats & Bars arrived. Our next event will feature even more local talent and an open mic section as we have been overwhelmed by the amount of talent from Canterbury. If you are an act make yourself known by attending and supporting the event. We support those that support us! It’s all love… its Beats & Bars babay babay!