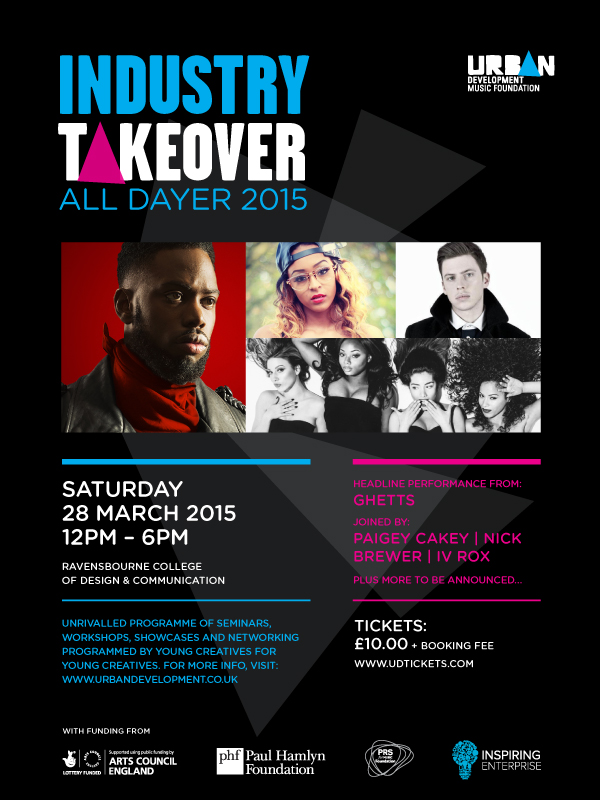 The UK music industry’s A-list and cutting edge urban underground talent collide for what is set to be the biggest Industry Takeover All Dayer yet. The music industry revolution is here: are you ready to take control?

On Saturday 28th March, the Industry Takeover All Dayer returns with a game-changing day of unmissable seminars, workshops and opportunities of heavyweight networking. The day-long event is curated by Urban Development’s network of young people, the UD Creatives, who know where the toughest challenges lie when trying to get your foot in the door.

Whether you’re a budding musician, manager or creative, Industry Takeover hot-wires you to a unique network of professionals. This is the event for anyone serious about making it in the urban music industry. And that’s not all, expect live performances from the names who are making waves in the scene right now: Ghetts, Nick Brewer, IV Rox, Paigey Cakey, and more to be announced.

Oritse Williams gives you the inside track on why he has opted to develop his music career behind the scenes; UK Music’s Jo Dipple delivers a keynote focusing on the UK’s positive contribution to the global music market; Hattie Collins chairs Grime 2.0 exploring the scene’s resurgence with Noisey’s Sam Wolfson, The Heavy Trackerz and Chipmunk; BBC Radio 1 and 1Xtra presenter Clara Amfo discusses the impact of radio on emerging artists with youth station Reprezent FM; EGA Music Group / Island Records A&R Colin Basta delves into all things management.

– Let’s Get It Started: set up a creative business and make money

– It’s NOT Who You Know: U-Talks give industry insight from the front-line

– From Bedroom To Brand: build a successful brand

Industry Takeover touches down at Ravensbourne College of Design & Communication on a mission to inspire the next generation of talent by taking the cause back to the grassroots. It is the event for anyone wanting to make it in the music industry and has provided a platform for some of today’s biggest stars.