North London Grime MC, Skepta  threw his support behind the #NigerianLivesMatter Campaign, and joined protestors at the rally in London on over the weekend.

The NigerianLivesMatter initiative was sparked over the western media bias, which saw them reporting and focusing heavily on the Charlie Hebdon terrorist events in France, which resulted in twelve deaths, while Boko Haram had been responsible for over 2000 deaths in Nigeria, which  hardly given any coverage by the western media.

Towards the end of the rally as can be seen in the video, Skepta  spoke via a megaphone, thanking all who attended the rally,  expressing that people all over the world including Nigerians will see that they cared enough to come together to bring attention to their plight. 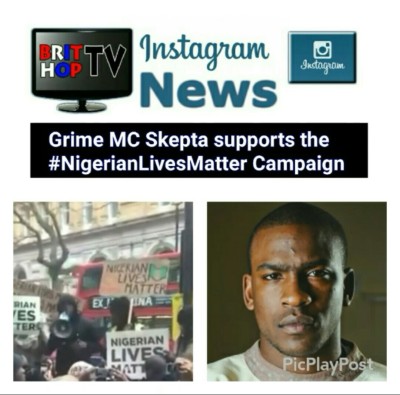