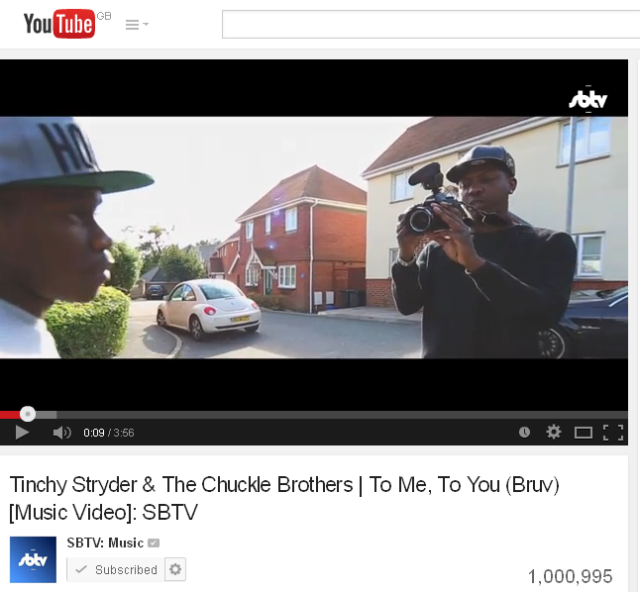 East London Grime MC, Tinchy Stryder‘s collaboration with the Chuckle Brothers, ‘To Me, To You (Bruv)’ has hit one million views on YouTube, and at the time of writing this article had accumulated 1,000,995 views.

The video was uploaded to YouTube on Wednesday, October 22, by youth broadcaster SBTV, whose founder, Jamal Edwards, can bee seen making a guest appearance at the end of the video.  In twenty-four hours the video had racked up  just under half a million views,  and three days later had hit the one million mark.

While a track with children’s TV characters the Chuckle Brothers may not be to the taste of most Grime and UK Rap fans, it’s worth noting that Tinchy Stryder has decided to donate all the profit from the track to the African Caribbean Leukaemia Trust.

Speaking on the matter Tinchy said the following;

“I recorded a track with these two absolute lads Paul & Barry AKA The Chuckle Brothers after we met filming for Keith Lemon’s show Celeb Juice, we really clicked on the day and had a proper laugh, afterwards Paul hit me up to get in the studio & just have a bit of fun!! We hope you enjoy the result – TO ME, TO YOU (BRUV!)

I’ve decided to donate any profits made from this release to the ACLT Charity.

Seeing Orin Lewis give a speech about blood donation and understanding how much we can all help to hopefully save a life, spread the awareness and also the story of how his son, who sadly passed away after overcoming childhood leukaemia and inspiring thousands of black and mixed raced people to become donors.”