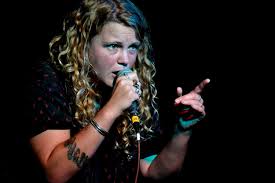 South London rapper, poet, and novelist Kate Tempest has expressed how proud she is to be nominated for a Mercury Music Prize.

In an interview with Gigwise.com she spoke about hip-hop being her inspiration, and wanting to give back to the artform which gave her an outlet for her expression, in her own way.

The 27- Year-old signed to legendary UK hip-hop label Big Dada,  and had her album, ‘Everybody Down’,  released in May this year. The Ninja Tune imprint is responsible for bringing us some of  UK hip-hop‘s most cutting-edge and experimental artist such as; Roots Manuva, Ty,  Speech Debelle and New Flesh,

Praised by the mainstream music critics, the thirteen-track, Dan Carey produced project has got Kate a Mercury Music Prize nomination.  Big Dada will need to be prepared to capitalise off that success of the award if Kate wins, as they were heavily-criticised by Speech Debelle, who claimed that they were ill-prepared for her winning the Mercury Music Prize in 2009 for her album, ‘Speech Therapy’,  failing to adequately market and distribute the album allegedly.

Since the announcement of the Mercury Prize nomination, ‘Everybody Down’, has been performing well commercially, taking the No. #2 position on iTunes Rap/HipHop Chart, and the No. #1 position on the BritHop TV compiled UK Rap/ Grime/Urban iTunes Chart for week commencing September 14