From Canada to the Middle-East: Wiley to support Macklemore & Ryan Lewis in Abu Dhabi, Dubai 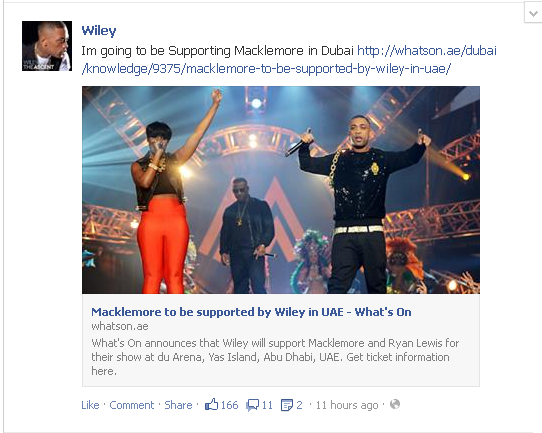 The ‘Godfather of Grime’, Wiley has approximately two weeks to whip himself into shape for a big show in Dubai.

The MOBO Award winning MC who has topped the UK singles chart with his dance anthem, ‘Wearing My Rolex’, will be supporting 3 x Grammy Award-winning, Macklemore and Ryan Lewis, on April 25, at Yas Island, Abu Dhabi.

In a statement reported by The National Wiley said:“The UAE crowds know their music and especially their rap, so I’m looking forward  to giving them what they want”.

Let’s hope that Wiley does not have any immigrations issues that would stop him performing. He was recently deported from Canada where he moved to try push his music, after becoming disheartened with record labels in the UK.

If you fancy flying into Dubai to catch Wiley do his thing later this month. You can get your tickets from ticket master in United Arab Emirates at www.ticketmaster.ae  and Virgin Megastores around the area.